Every works are unique and featured. Yet they not only won’t grab the limelight but set off from each other.

The group exhibition combines the emotion which behind each works by the notion of hyperspace. “If in a five-dimensional space or six-dimensional space, we could choose one story to become our life. How would you make the choice？” is the main concept.

GIN HUANG Gallery “Hyperspace | 2017 Winter Collective Exhibition" will be held from 1 Oct. through 20 Dec. 2017. The group exhibition will comprise works by Val, Anna Berezovskaya, Zorikto Dorzhiev, Antonio Santin, Yoshitomo Nara, Huang Yuan Te. Anna’s sincere depiction of an ordinary life and Val’s soulful emotions; Huang Yuan Te’s fantastic passion and Nara’s naughty innocence; Antonio makes imagery vivid and Zorikto brings tranquility. Five international masters with one new generation Taiwanese artist, from graphic arts sculpture, from realism to surrealism, whose affection and emotion compose together. Every works are unique and featured. Yet they not only won’t grab the limelight but set off from each other.

The group exhibition combines the emotion which behind each works by the notion of hyperspace. “If in a five-dimensional space or six-dimensional space, we could choose one story to become our life. How would you make the choice？” is the main concept.

Val lived her youth and adolescence shuttling, between South America, Africa, Europe and France where she was born. She started her artist journey as visiting one friend’s studio. The figure in Val’s work is always thin and long. However, the foot is big which make the soul different from secular and give soul a stability image. These souls express not only self-awareness but also the affection between people with people or people with environment. The line of Val’s work and the looks of soul are simple. Yet it can easily convey the sentiment that can’t express through words.

Anna uses of universal themes, inspired by the artist's own life and imagination, transcend time and space, combines Russian culture and literature. She uses symbolism to create timeless works on canvas and paper, carefully selecting subjects that transcend time and space to convey her ideas and emotions. It makes resonate with viewers' own emotions and the values we hold close.

There are various and dazzling carpet in Spain. Antonio uses his country culture as inspiration to create the surreal carpet which are all oil on canvas. Antonio is expert in using light, shade and contour to make graphic arts look like stereoscopic. The floral pattern is stratified, elaborate and vivid that give the works a flexible vitality.

The Republic of Buryatia is tormented with complex politics and adverse weather conditions for a long time. Therefore, the locals live in a distress surroundings. However, the conditions where Zorikto grew up becomes the source of inspiration when Zorikto are creating. That’s why the figure in Zorikto’s paintings feels like unrestrained and comfortable. Moreover, black brings serene. It makes people feel tranquil. Perhaps, it is the most precious place in Nomads’soul.

Yoshitomo Nara’s children usually look dismal, but they always have a healing charm to catch people’s eye on them. Aomori Ken shows no express on its face, yet it radiates a pure tenderness and let people feel comfortable. Nara’s artwork primarily features depictions of children with oversized heads, in a style directly influenced by children’s book illustrations. His children are often sullen and angry, imbued with the angst and rebellion of Nara’s Punk rock influence. Nara’s work spans a diverse range of media, from postcards to canvas paintings to three-dimensional sculptural works, and has acquired a cult-like following as varied as his methods.

Huang Yuan Te’s family opened an iron factory; a significant influence in his work due to childhood experiences of being surrounded by metal machinery and gear. Yuan Te recycles the memories to compose a new image of the cold materials. He mixes fantasy and steampunk into his creation. Look Yuan Te’s gears revolving, we follow the 19-century’s romantic steampunk and full into a science fiction world. 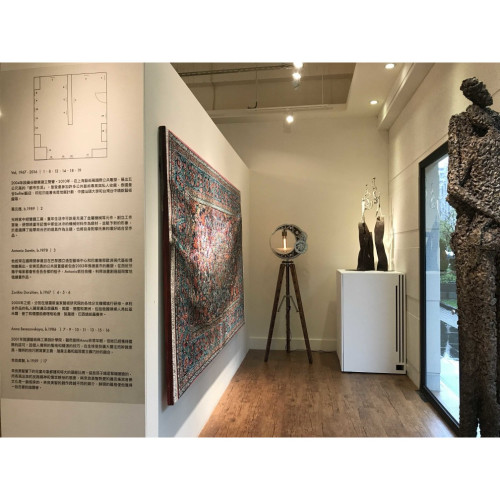